I remember either an advert or a dramatic scene on tv in which a young woman and a man were travelling on a train. This was an old carriage with slam doors, and the woman was heavily pregnant. She was having some kind of crisis and was being blamed by her husband. At the end of the scene, both were happy again. 'You always know how to say the right thing', she said. I was deeply impressed by this at the time. I still am, in a way - I always want to say the right thing.

Partly this is out of love for my my family and friends, and partly out of not wanting, as the saying goes, to put my foot in it. I have a horror of that, of making myself look foolish and awkward by misreading what to say to that person, or rather, what they need me to say. This stems, I think, from my desire to want to fix things for people, an impetus that informs and directs my approach as a PhD supervisor and tutor. But I don't think this approach is necessarily the right thing to do. Some things simply can't be fixed, and I feel disappointed and wretched by 'failing' to fix it; and some times, maybe, you have to let people 'fail', to allow things to go wrong. Above all, I have to let myself fail. 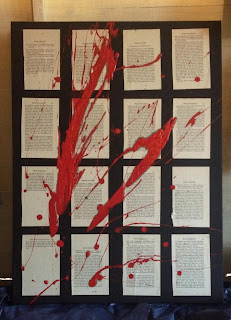 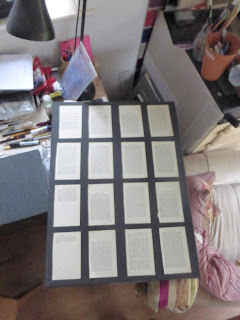 This happened in my art practice over the last couple of weeks. I had primed a canvas with black gesso and then glued pages from Machiavelli's The Prince on to it in a grid pattern. Once it had dried, I splashed red paint on it, but in the end I found the splatter-pattern a bit unsatisfactory and decided to do more work on it.

This, unfortunately, was a mistake. The canvas 'went wrong' in that the effect I hoped for - using a brush and a palette knife to make violent marks on the canvas, charring it with a blowtorch - seemed amateurish, clumsy. I had thought of the canvas in terms of protest or staging a moment of violence against institutionalised political power, but it didn't work. And the more I did, the worse it got. I slashed the canvas diagonally, then sewed it up. In the end feeling this piece had become a complete failure, I cut the canvas from the frame, and then cut the whole into four quarters.

What to do with it? I first thought of burning it, burning the frame, and then doing something with the ashes.


Then I wondered about further cutting, turning the pieces into smaller pieces - strips, and then smaller rectangles, returning to the shape of the book pages themselves. I mounted the small pieces in another grid pattern, with one large piece looking like the covers of a book. The pieces themselves seemed to gain power from themselves being cut up and, as you can see, being stitched back together. 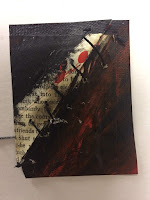 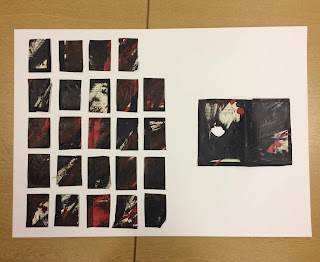 My friend and colleague Jenn Ashworth has recently published a wonderful book of memoir/essays called Notes Made While Falling, which I thoroughly recommend that you read. It opens starkly with a scene where Jenn narrates her experience of being awake during an operation and hearing her blood falling to the floor; it's an incredibly powerful piece of writing that I'm going to return to on here shortly. Jenn was interviewed by Lee Rourke recently for 3AM magazine in a piece titled 'Cutting and Stitching', in which she discusses how the book came out of 'failed' experiments in trying to approach this material, and it is, in some ways, a form of assemblage. Jenn uses the slash ('/') typographically in an unusual way to represent the conjunctions, not only in terms of material but in terms of time and place.

As I said above, I had slashed this canvas diagonally, from top right to bottom left: a '/' writ very large. But it didn't work. There wasn't any tension there.

Notes Made While Falling begins with a scene of pain, and it's a powerful evocation of that moment - so much so that when I first read it, I had to put the book down for a bit. I have come to realise that, for me, pain and suffering, and also anger about the pain (Notes Made While Falling gives full acknowledgement to that rage) is a kind of event horizon for me. It's the zero sum of representation. If I try to present it, it doesn't work. It's too direct, clumsy, amateurish. It has limited traction on my imagination. It has to become something else. So that's what I did with this material.

Did I 'fix' the work that had failed? I don't think so, actually. As Jenn insists in the book and in the interview, cutting and stitching isn't about healing or recuperation: it's not about fixing yourself. What emerges from it is the possibility of new work, new things to think about and do.