Emotional labour: crying in the classroom 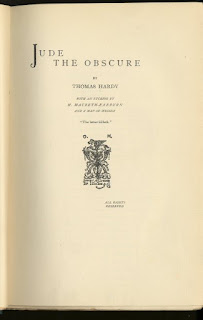 My A level English Literature teacher was a man by the name of Omi Gumbeer. He had been born in India and had, as a child and teenager, fallen under the spell of certain books. One was Thomas Hardy's Jude the Obscure, which, he told the class, had made him cry at the famous point at which the bodies of Little Father Time and the other children were discovered. Hardened 16-year-olds, we found this a bit strange, even absurd. Crying at a book?

I was reminded of Omi Gumbeer this week when my wife Deniz started to re-read Jude. (I found it a frustrating novel, when I read it some years ago, because Hardy's reading of the social scene seemed to have no gaps, no space outside.) Deniz, who teaches literature at a university and has done for over 25 years, often cries when she reads books. She sometimes feels emotional in the seminar room, discussing them with students. I never do. Well, almost never: I cried once, reading The Amber Spyglass to my daughter.

I have been wondering why that is, considering I've been teaching literature for 20 years and studying and reading it for nearly twice as long. I'll cry at the most shamelessly manipulative emotional cues during children's animation films, while recognising the most hackneyed set-ups for what they are. But powerful emotional writing? No.

I think the reason is that I have a very complicated relationship with words. In a way, for me words have been a way of not communicating emotion. I have hidden behind words. But words have also failed me at times of stress or upset: when I feel anxiety, it often goes to my jaw, which becomes clenched tight; and as a boy, after moving schools, I developed a stutter for a short time, which I eventually grew out of or moved past (though occasionally traces can be heard). I remember this as feeling that words jammed together, got stuck, and couldn't come out.

I don't tend to show deep emotion when I teach or lecture, though I have been known to make classes laugh, and I am quite animated/ enthusiastic. It is, in many ways, a performance, one I've become quite expert in, and one whose techniques have kept me afloat in the worst days of anxiety and depression. I don't think I'm alone in this, in academia.

As is well known, when it comes to emotional labour in academic life - the pastoral care of students in particular - that work is gendered. Women colleagues do far more of these jobs than men, and the work they do is commonly under-valued. I think this is symptomatic of a general suppression of emotional bonds in academic life that has been accelerated by the bureaucratic changes of the last decades, with REF, TEF, audit culture, league tables, and grant application metrics setting colleague against colleague, institution against institution.

Last year, at our departmental away-day, I made an impromptu and impassioned speech/ plea in favour of increasing collegiality, of trying to sustain the affective bonds of care and friendship that had been so visible and sustaining during the 2018 strike. I think my colleagues were surprised by it, but were sympathetic to the sentiments I expressed, and in some ways it was the first breach in the dam of feelings which came to a head by the end of the year.

Reading today about the egregious and exploitative behaviour of the current Prime Minister in relation to young women, it only strengthens my sense that the affective boundaries in situations of power have to be very strong - between lecturer and student, between supervisor and supervisee, for instance. Being in loco parentis is a position of trust that myself and my colleagues take very seriously. But as I have said above, in relation to pastoral work, there is a relation of care that is absolutely vital in the academic setting, both between colleagues and between staff and students.

Something that doesn't often get mentioned these days, I think, partly because the government has long encouraged students to think in terms of their relation to their studies as an economic one (they are customers for our services) is that many students care for us, their lecturers. It was incredibly heart-warming to find students on the picket line with us last year, but even without this level of political commitment, the relation between teacher and student is more than an economic one: we're not shopkeepers. In fact, it has to be more than an economic one to be successful.

As we know, the university system as currently constituted is a sick system: it makes students unwell and it makes staff unwell. The veneers of 'professionalism' mask a re-organisation of higher education that repressed the affective bonds of the community in favour of what Carlyle called the 'cash nexus'. This leads to problems with mental health, with depression and anxiety; it leads to burnout and colleagues leaving academia; it leads to a shrinking and diminishing of what the university should be.

I don't think I will be crying in the classroom - I'm not wired that way, as a cyberpunk character once said. But I will be thinking about those affective communal bonds when I teach, and I will when I begin my MA classes tomorrow.
at September 29, 2019 No comments:

Back in May, my PhD student Kerry Dodd and I put together a small conference called Glitches and Ghosts, which tried to think about hauntology and the eerie in terms of digital culture, and especially in terms of interruptions to digital worlds or flows (the glitch). It was very successful and we hope to do a sequel some time soon.

In relation to this, I gave a paper at the 2018 International Gothic Association in Manchester to to with Hilary Mantel's Beyond Black and tape recordings, part of my interest in EVP. While I was working on An Invention, a side project came to mind related to EVP, tape, transmissions, space programmes and Situationist maps of the city, and particularly the two Debord/ Jorn collaborations on Paris and Copenhagen. I created a concertina book, two-sided, which reflected my recurrent concern with these intersections.

Here are a few images: 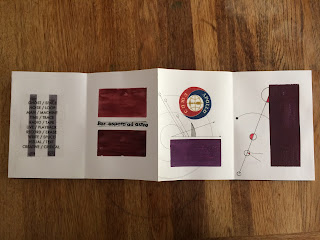 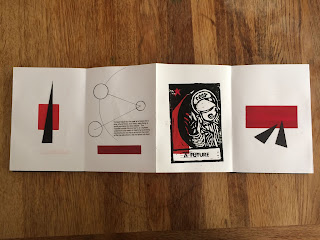 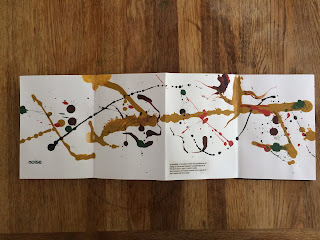 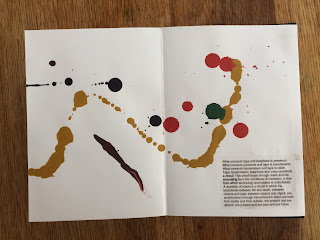 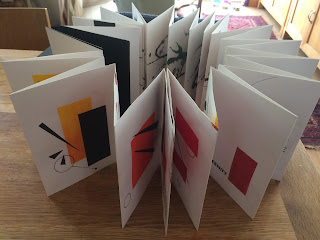 The image of the cosmonaut was off the top of my head - it's a woodcut. It was interesting to find, some months later, publicity shots of the Soviet space programme in which cosmonauts used just that gesture of welcome and friendship. Some kind of transmission, it seems. 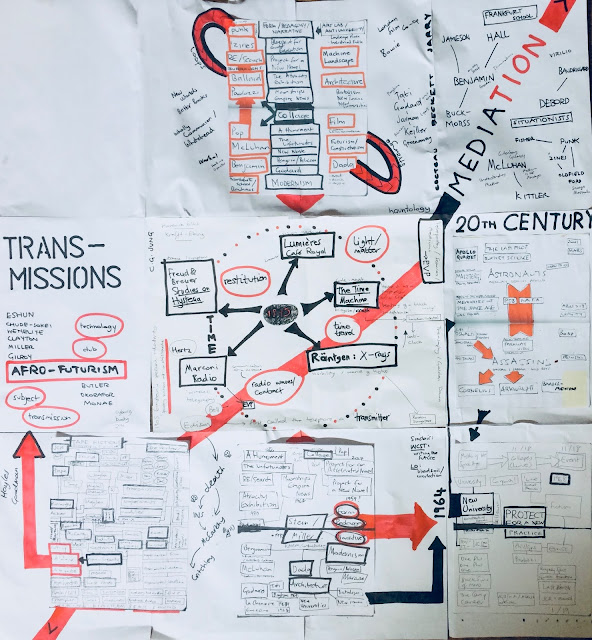 I've always thought spatially and my notebooks are full of diagrams, charts, mind-maps and the like. Last year a colleague introduced me to the Blueprint for Counter Education, which was based on three fascinating wall charts developed as pedagogical tool. In a rough-and-ready way, I stitched a lot of my notebook diagrams together (physically) to produce a large wall chart that encompasses a lot of my recurrent interests/ concerns/ obsessions over the last few years. They started with a paper on EVP at the International Gothic Association conference in Lancaster in 2009; in 2018 I returned to the IGA (in Manchester) to give another paper on tape and ghosts in Hilary Mantel's Beyond Black.

As you can see, the year 1895 is at the heart of it all. It's the threshold of the 20th century, come 5 years early. I was speaking to friend, colleague and research partner Bruce yesterday, and he's started a different project inspired by A Humument, this one based on Frances Willard's A Wheel Within A Wheel, a book about cycling and women in the late 19th century. When was this book published? 1895.
at September 17, 2019 No comments:

Here are some types of book which use the relation between text/type and image in an unusual way, challenging conventional assumptions about the codex form.


None of these involve the various forms and modes that the comic or graphic narrative or sequential art (choose your label), except the first, which turns those techniques to non-fiction. There must be plenty of others, which I'm intending to pursue.
at September 11, 2019 2 comments: 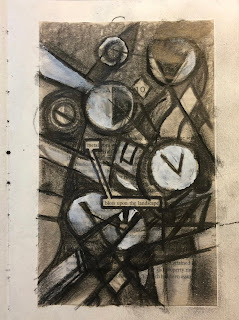 There's a curious symmetry to this blog. I started it in December 2009, in the middle of very difficult personal and family difficulties; the blog ran out of steam by the end of 2017, the last post in December of that year, as I was about to enter what was to be the most difficult year of my life so far, my 50th year on this planet. Through a set of circumstances, some of which were very long-standing and some which were more recent, I became increasingly depressed and anxious, my days filled with dread. I carried on functioning at work and, probably less successfully, at home, until November 2018, when I  had what was, in retrospect, something of a breakdown. I've managed to keep going through the efforts of family, friends, counselling and doctor to support me and try to come to terms with things, manage and if possible change them.

Not surprisingly, the commitment to writing this blog waned as the depression waxed. I found I had nothing much to write about. Some of the posts had been seed-beds for what became chapters in a book, but with that project finished, the blog became a bit of a chore. But then, other kinds of writing have also dried up - I've finished a couple of articles but little else.

In October 2019 I started a project that I'd been thinking about for ages - a treated version HG Wells's The Time Machine. It started out as a bit of a Gothic re-writing, but quickly turned into something else - a meditation on WW1, partly produced out of the Centenary commemorations last November, but also some discoveries in family history - two of my great-grandfathers had been in the war, and one, George Staples, who worked on the military railways in France, had been gassed and died back in Aldershot in July 1918. (I also found that my Grandad's younger sister had been born in November 1918, 4 months after his death, but had herself died a few days after her birth.) So this project, called An Invention, became about loss and trauma, and was something of a therapeutic endeavour. I finished it in at the end of July 2019, 10 months after beginning. But I'm carrying on with the method.

Coming out of this project was a wish to pursue the relation between art and literature, image and text, much more directly. To that end, I'm starting an MA in Art Practice at the North Wales School of Art in a couple of weeks. I'm hoping to be making bookworks, prints, collages, and other art based on books and paper and print.

I'm also re-starting this blog, but with a different emphasis. It will be less essayistic and will feature more visual material - sometimes sketches, sometimes a scan or photo of some kind of visual diagram or chart, pages from notebooks, bits and pieces I've been working on for the last year or two on different, but related projects (on sound, on EVP and haunted technologies, on transmissions and the subject, on collages) that will hopefully form a bit of an online constellation of what I'm aiming to stitch together. By making it less formal, I'm hoping to post more regularly, at least once a week, and also to get back to the rhythms of writing.