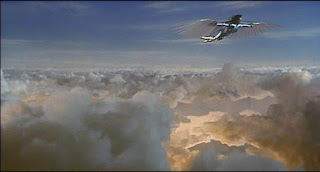 Having returned home from this year's Fantastika conference, organised by my (now former) PhD student Chuckie Palmer-Patel, I feel tired but invigorated by the papers and talks I heard, and also much heartened by the supportiveness and engagement in evidence among those new to the conference and those who (like me) returned for its fourth year. That's been the mode of the Fantastika conference from its inception some four years ago, and the community that Chuckie has helped build up at Lancaster and elsewhere, where scholars of science fiction, fantasy, Gothic and the Weird can come together and talk across and between different modes in a fruitful conversation.

This year's conference, for me, has also been coloured by a kind of wistfulness as Chuckie is leaving the UK and returning to Canada, to Edmonton in Alberta. Chuckie's always been a source of great energy and purpose since she arrived at Lancaster. Chuckie's vim and vigour meant I always had a lot to read, to guide and suggest things, and sometimes to help edit down, but it was her way of dropping in at other times, outside of the schedule of supervisions, that I will remember - she would often come in and stand in the midst of my (rather cell-like) office space and we'd talk about what was going on.

This morning I checked the corrections of another of my supervises, Freyja, who also finished her doctorate at the end of last year. I was particularly struck by what she wrote about my having confidence in her project even during the times when, for her, this had been lost. Partly, I think, that is what being  a PhD supervisor is all about.

The word often used for young adults leaving the parental home is 'fledging', and helping supervisees to fly is often the way I feel about the process. I'm a flying instructor, allowing the person (as well as the scholar) the time and space to find their own way, providing help and guidance as they take their first leaps into the air, then suggesting adjustments to their technique, and then at last, watching proudly as they fly around on their own, calling encouragement. Very often, their aerobatic abilities exceed my own.

As Chuckie goes back to Canada, she leaves the legacy of Fantastika behind, and we'll try to carry on: in some form, After Fantastika. Alongside the conference, she has also edited and published the Fantastika Journal, which has just come out, and I'm proud to say that I'm in the inaugural issue. Hopefully, she will go on to do many more.

The scholarly community studying across the field of Fantastika modes remains strong at Lancaster. Colleagues such as Catherine Spooner and Taj Hayer gave fascinating lectures at this year's conference, and on the creative side of things, Lancaster is the home to a group of writers that work in sf/f including Eddie Robson, who spoke about working in tv and radio and writing science fictional work. Others colleagues such as Andrew Tate and Sara Wasson also work in these fields, and have supported the Fantastika community. Thanks to everyone!

Several of my present and future postgraduate students presented and attended the conference, whose work I'll support and guide as they take their own leaps into flight, which I look forward to. It's an amazing privilege to be able to do this part of my job, and part of the thrill of seeing them fly is getting to know where they land. And finding out what they do when they get there.

A few years ago now, I attended an event in and about Morecambe, and later wrote a blog post about it. Next week I'll be going again for a related gathering of colleagues called Sandscapes, and in thinking about it I looked through past work to see how often I'd looked at the sea, seaside or the beach in my own work. It appeared more often than I thought.

I grew up by the sea, if one calls Estuary Essex the seaside: Leigh-on-Sea, Westcliff-on-Sea and Southend-on-Sea certainly think they do. The water is certainly briny, the expanse of water broad, the air full of the tang of salt. True, you can see the North Kent coast, or the Isle of Sheppey, on a good clear day. It's not the wide Atlantic, nor yet the cold North Sea where my forebears fished for oysters, up the Essex coast at Tollesbury; but I do feel like I have salt water in my veins, and though I now live in the Welsh hills and mountains, the sea always calls me away from the uplands.

Here, then, a four postcards which correspond to my recurrent visits to the beach and the sea in my own work. They are interleaved with 2 related musical connections.

Following the Morecambe event, I gave a paper at a conference on The Who's Quadrophenia and the 1979 film of the album. This was a great event and has led to a collection of essays, which will be out soon, to which I'm proud to have contributed. I presented a paper on the scooter and Mod masculinity, and concentrated partly on the image on the back of the Quadrophenia album, in which a scooter lays half-submerged in the sea. If 'the beach is a place where a man can feel/ he's the only soul in the world that's real', the beach is also a place of possible dissolution, of disappearance from the world. (One of the songs on the album is called 'Drowned'.) As a look at the videos I have assembled in a playlist below will show, this is a common theme in thinking about the beach and the sea. It's a place of escape, even of refuge from the everyday world; but it's also place of danger, a place where the land (and life) ends.

I have, like many British people, family connections to Australia. My aunt, uncle and cousins live in Perth, WA; and back in the early 1960s, my Granddad planned to take the family to Adelaide as 'ten pound Poms' on the emigration scheme then in existence, but my Nan backed out at the last minute. I taught Australian cinema many years ago, in my first academic job, and I've subsequently written a couple of things on Australian themes, both of which feature the beach and the sea. The first was on Nevil Shute's On The Beach, a post-apocalyptic novel in which the residents of the Southern Hemisphere await the radioactive fallout from a terminal nuclear war in the global North, in a slow decline into death. The second, more recent, was on Alan Garner's novel Strandloper and can be found shortly in the Fantastika journal. This is a 1997 novel which focuses on a Cheshire man who is transported to Australia and, escaping from his shackles, is saved from death by the local indigenous peoples and enters the Dreamtime as 'Murrangurk'. Eventually, more settlers arrive and the man returns to Cheshire, to find all has changed; he takes it all as a part of the path of life. An extraordinary novel, it describes, in essence, the destruction of Aboriginal life through colonialism. 'Strandloper' is referred to in the text as a 'estuarine Plover', a bird, but its derivation also comes from Afrikaans, meaning the Namibian bushmen of the Skeleton Coast who, like many Australian indigenous peoples, did not survive long the arrival of representatives of the global North.

The Terminal Beach I (Ballard)

I've long been fascinated by the writing of JG Ballard and have written about him many times. In a collection on Ballard's work, I contributed a chapter on Ballard's short stories and his early novels of the 1960s. Ballard's third novel, The Drought (aka The Burning World) is one of his four symbolic apocalypses that constitute an early fiction sequence. (The other elements are wind, water and crystal.) In a scene from The Drought, where a thin film of polymer has covered the oceans and has prevented evaporation, leading to massive climate change, survivors live in a small community on a beach. The protagonist becomes a kind of 'water herder', sweeping small runnels of water along the hard strand to be collected and desalinated. This appears like an image of labour at the end of time: attempting to sweep and contain the uncontainable. A short story from the year before, 'The Terminal Beach', is one of the most important items in Ballard's oeuvre. It begins the period of his formal experimentation which comes to a peak with The Atrocity Exhibition (1969). It is set on Eniwetok Island, among the concrete blocks of the nuclear testing ground in the Pacific, where nuclear powers flexed their Imperial control over spaces in the global South through atmospheric testing of atomic and nuclear weapons. (As I wrote about in relation to On The Beach, the British had also done this on the Australian mainland, displacing many Aboriginal tribes in the process.) This 'terminal beach' becomes a symbolic site of dislocation and alienation for the Ballardian protagonist, prey to the algebras of power and violence of the Cold War world.

Recently, my friend Bruce discovered a cassette- and digital-only music label which releases albums by electronic artists, creating new soundtracks inspired by obscure films. Here is the first of two we have recently collected, 'Anja & the Memory People' by The Asistent, which was inspired by a Czech sf film. The other, inspired by French film noir, can be found here. 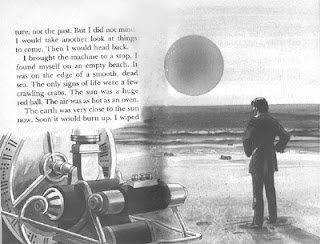 The final connection is to a book I have taught regularly and refer to all the time; I'm fascinated by time machines and time travel and I'm doing some writing about it at the moment. HG Wells's The Time Machine was the subject of one of my earliest posts on this blog. Towards the end of the novel, in the section called the 'Further Vision', the Traveller arrives on a far-future beach with a large red sun hanging low in the sky. Though he has travelled far in time, in space he has travelled hardly at all: this terminal beach now occupies the space of the London suburbs he calls home in 1895. While he is there, he spots the remnants of life on Earth, a distant descendent of human beings, a tentacled football-shaped thing that 'hops fitfully about' on the beach. (He refrains from having a kickabout.) This presents Wells's rather bleak view of human 'progress' under the mechanism of evolution; there is little room for hubris here. What strikes me here is that the Traveller ends up, on the outskirts of London, staring out from a flat beach. It is almost as though he has used a different kind of late Victorian 'time machine', the train, and has gone on a day-trip to Southend. In a much later sf novel, Douglas Adams' Hitchhiker's Guide to the Galaxy, Arthur Dent and Ford Prefect find themselves on a strange vision of Southend Pier (after escaping from the Vogon spaceship). They realise something's wrong when they notice that the water stays still while the pier comes in and out like the tide.

The beach, in all four of the calling cards, is a place of endings and beginnings, a place between the land and the sea. It is a place of movement and migration, but also a place of stillness, of contemplation. One stares out to sea, like the Time Traveller, or one walks along the stones like Jimmy from Quadrophenia, thinking about his future. It is located in space but also fluid, changing, shifting its ground all the time. For writing, for the imagination, it is a place of possibility.
at April 01, 2017 No comments: