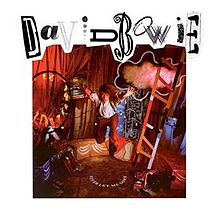 Occasionally I get these hobby-horses, obsessions that consume me for a few days. This week, after the anniversary of his death, I've been mulling David Bowie's 1980s 'decline' after Let's Dance, which some narratives of his career figure as terminal. (I don't agree, by the way. Bowie came back twice, with Black Tie White Noise and Buddha of Suburbia in 1993/4, and then with The Next Day in 2013. Some of my favourite Bowie albums are in that 'second' phase, from Outside to Reality.)

In some ways it's not surprising. His next album after the massive hits of Let's Dance was Tonight. Tonight, I have to tell you, is absolute shit. It starts with 'Loving the Alien', which is a good (if a little awkward) track, although in this version it rambles on for 7 minutes (the single comes in at just under 5). And then you get what makes up the rest of Tonight except for the other two 'originals', 'Blue Jean' (a decent minor hit) and 'Dancing With the Big Boys' (a clattering, funky mash-up with DB and Iggy Pop barking phrases at each other, which got a good remix by Arthur Baker, but really could have done with the Trevor Horn/ Art of Noise treatment): what you get is cover versions. Extremely bad cover versions.

There are three Iggy covers on the album, along with two collaborations. The first is 'Don't Look Down', which is insipid, rubbish white reggae. The second is 'Tonight', a duet with Tina Turner, more cod-reggae which takes a large crap on Bowie's work on the album the track originally came from, Lust for Life. The third is 'Neighborhood Threat', which comes across as a bad knockoff of an end-title song from a mid-80s action/war cash-in, Iron Eagle II or similar. Kenny Loggins, but not as good. Between the first two Iggy covers is a version of the Beach Boys' 'God Only Knows' which, in my opinion, is the most rotten track put out by DB as a major artist.

On Pushing Ahead of the Dame, Chris O'Leary calls Bowie's performance on that track 'astonishing in its tastelessness'. (I recommend you read all the reviews of this album to give yourself a good laugh.) Now, while I agree, I'm not too hung up on matters of 'taste': my favourite Beatle is Paul McCartney. Tastelessness in rock is fine, in fact it's part of the deal. But what O'Leary is getting at is the sheer gaudiness, the vulgarity, the offensive gingerbread-work ornamentation of both the track and Bowie's vocal stylings. Compared to the austerity of the Eno albums, it's hard to believe it's the same artist. But in a sense, what you have in Tonight is Bowie's full-Vegas period, his short go-round on the carousel of commercial, mainstream pop. And he falls off. On Tonight Bowie is an 'entertainer' (see the 'Blue Jean' video, his make up shades of Archie Rice), who doesn't entertain. There's nothing there. And I think he knows it. Tonight is a cash-in, no more, no less.

That's why, I think we have all the Iggy covers. Sure, Bowie's doing his mate a favour, and 'China Girl' was a big hit, so why not mine the back catalogue? But there's something else. If Bowie has gone Vegas, he's haunted by Iggy himself, the fukt-Elvis, the rock'n'roller as abject, the self-lacerating self-destructing antithesis of the commercial imperative.

The Iggy covers and collaborations are a sign of Bowie's profound discomfort, I think. Iggy's presence is alchemical, a magical means by which to offset the glittering turds which pile up as you listen to the album. Apparently Bowie had demoed quite a few tracks for Tonight, unusually, nearly all of which didn't make it (some, it is suggested, went on to Iggy's Blah Blah Blah in 1986). But he went for all these terrible, terrible cover versions instead, almost a kind of mea culpa as he's doing it. 'Yes, I'm selling out, this is a cash-in, sorry, but look, here's Iggy...'

Bowie didn't learn his lesson, either. Never Let Me Down's execrable second side ends with a cover of Iggy's 'Bang Bang', and while it's not a horror on the level of 'Tonight', it's still plenty bad.

But the 1984-1987 period isn't all awful, and you can make a decent album out of assorted songs. Last night I fiddled with sequencing some of the decent tracks on the first side of Never Let Me Down, the listenable Tonight songs and other odds and ends from the period (mainly soundtracks), and it's not bad:

Side 1: Loving the Alien / Time Will Crawl / This Is Not America/ Never Let Me Down / Zeroes
Side 2: Day-In, Day-Out / Dancing With the Big Boys / Blue Jean / When the Wind Blows / Absolute Beginners

Ok, it's never going to break the top 10 of a Bowie album poll, but it's not much of a dip from Let's Dance. It's nearly all singles, too. Rather than make Tonight, I suspect he'd have been better off doing a greatest hits package with some new songs thrown in, maybe some live versions - a bit like Nothing Has Changed. And then we might not have had Tin Machine.

But also we wouldn't have had the comebacks, Lazarus-like, returning from commercial death in 1993/4 and then from his ten-year hiatus in 2013. And I think the comebacks are key to Bowie's career. On top of the world in 1983, he was vilified by 1989, laughed at - if you remember, 'Laughing Gnome' topped the phone-in poll of requests on the Sound+Vision tour in 1990. (He didn't play it. But the ChangesBowie retrospective went to no.1 in the UK that same year, the first Bowie cd I bought.) The second Tin Machine album in 1991 gleaned reviews so bad that one, by Jon Wilde, which called DB a 'fucking disgrace', apparently made him cry.

So an artist as talented, as extraordinary, as Bowie, one whose death was a major cultural event, was capable of making very bad work. Work that was so shockingly miscalculated that it was despised or ignored or simply forgotten. And I like that. Not just that he came back, but that he failed, and failed so spectacularly, in the first place. For me, that's comforting, in a way, and a source of hope. Bowie gives us license to screw up, badly, to let us down, and then to come back.
at January 12, 2017 No comments:

Over Christmas I read Jonathon Green's excellent oral history of counter-cultural London, Days in the Life. Not surprisingly, the book ends (in 1971) on a down beat, with several contributors noting that hippy lifestyles were too often another form of consumerism, and that the counter-culture's emphasis on individual desire and freedom opened the way for Thatcherism, which can be seen not only as a reaction to the 'permissive society' but in some senses its extension and completion. The story of the Sixties, as often told, is one of failure: the unachieved revolutions of '68, the murder of Meredith Hunter at Altamont, the elections of Nixon and Heath and so on. But, of course, there were real and substantial gains, in terms of civil rights, legalisation of homosexuality, challenge to censorship laws, the rise of feminism, and so on. Perhaps it's something to do with our own times that we see the decade in terms of its political failures, what it did not (and perhaps could not) achieve, rather than its manifest successes - let alone its extraordinary cultural production.

What many of the contributors to Days in the Life identify about the hippy movement was its lack of any kind of ideological rigour - and in fact, when this was introduced towards the end of the decade, that was when the larger counter-cultural constituency (from wealthy people who simply enjoyed the lifestyle, to radicals who saw things in terms of social and political revolution) became unglued. Probably, of course, it was the very lack of a defined ideology or program which allowed these very disparate people to hang together in the first place. 'Peace and love' sloganeering can only take you so far - but it takes you somewhere.

On Chris O'Leary's wonderful Bowie blog, Pushing Ahead of the Dame, he calls the Bowie/Queen collaboration 'Under Pressure' 'a sad hippie song beneath its arias and cannonades': 'there’s a sadness along with the bravado, a sense of loss to go with the heroics. Something is going away, going away for good, and Bowie and Mercury see it, if only in shadows.' He calls it 'the last song of the titans'. I never paid the song much attention until recently, and it was this Pushing Ahead of the Dames entry that made me think about it differently. O'Leary is right in pinpointing Bowie's 'crescendo performance in the second bridge' as the key: it's the one that contains the lyrics

Love. Every time I hear that section now the hairs raise on the back of my neck. Even more so than in 1981, when 'Under Pressure' went to number 1, I feel the urgency of this lyric. The 'love' of the counterculture, 'All You Need Is Love', the universal panacea, gives way to something more direct. We might call it care, as Bowie does; or compassion, or empathy, or understanding. It's something that stands behind Brexit and the resistible rise of Donald J. Trump: we have been encouraged not to care for others, but also not to care for and about ourselves. Perhaps we should understand late capitalism or neoliberalism or whatever you might want to call it as an emotional project which teaches us not to care for others; that the world is a competition, there are winners and losers, and you had better be a winner. Both Brexiteers and Trump rattle on endlessly about 'winning', for good reason. It reflects a worldview in which to care is to be weak, to not look out for yourself, to lose.

But caring for yourself and caring for others are connected. What does it say about oneself, or the society in which we live, if we can ignore the pain of other human beings? If it is 'better' not to care? In academia, we are now forced to run several rat-races: the REF, the TEF, grant funding, and so on and so on. Not because these things have value in themselves: they have none. They are in place to encourage or rather determine a certain kind of behaviour, a certain kind of emotional response, to others and to oneself. To be competitive, not collegiate; to place one's energies towards certain tasks and not to others; and what this produces is anxiety, and fear, and a sense of worthlessness, and misery. It's a microcosm of what has happened and is still happening across the UK and US and elsewhere. In this new year of 2017, which I think of with apprehension rather than hope, anxiety rather than excitement, I make no resolutions, except to be able to look into the mirror and know that I care, for others and for myself.