Anarchy (and science fiction) in the UK 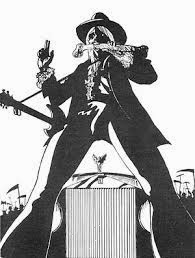 I met Ken Macleod fleetingly at a science fiction conference over a dozen years ago now, and he seemed a very approachable and friendly fellow. This week I read the first in his Fall Revolution series, The Star Fraction (1995), though it’s been sitting on my shelf for while. Immediately prior to this, I had read Lauren Beukes’ Moxyland (2010) for the science fiction reading group that some students are running in the department; and I also scooted through Michael Moorcock’s Modem Times 2.0 (2010), a short Jerry Cornelius text published in PM’s ‘Outspoken Authors’ series. While I though Moxyland so-so, a variant on cyberpunk tropes, I really engaged with The Star Fraction, which was no less post-cyberpunk (its central narrative concerning the coming-to-consciousness of an AI, and the end a When-It-Changed kind of moment, straight outta Neuromancer). Macleod imagines a fractured Britain, with a Hanoverian Kingdom, an archipelago of mini-states dotted across the isles (including the Christian Beulah City, occupying parts of North London, and Norlonto, the ‘free’ space around Alexandra Palace that is home to a non-governmental space program), and the remnant of the overthrown Republic existing as both an exiled government-in-waiting and private military force. Macleod’s future Britain is both Balkanised and militarised.

Norlonto is, though, a kind of anarchy. That is, it has no central government; law is enforced through contractual agreements between groups and individuals; social welfare is organised through collectives and mutual aid; and freedom of speech, individual liberty and a free market are crucial to how Norlonto operates. It is, in fact, a variant of anarchism closer to anarcho-capitalism than a classical model of anarchy; and the militarization of its fabric, its competing ‘terrorist’ groups and security outfits, marks Norlonto as a problematic ‘utopia’. If this is a social space in some senses ‘more free’ than one with an oppressive state apparatus, it is also one riven with factionalism, violence and insecurity. The London of The Star Fraction is no News from Nowhere.

What I really liked about The Star Fraction was the concreteness of the imagined future, and its embeddedness in a history of the politics of resistance or opposition. Many of the fighters and space workers are communists or anarchists dressed in boots and jeans and leather jackets, their debates held in pubs over beer and cigarettes, their ideas informed by political tracts picked up from second-hand book stalls. The picture of Norlonto that Macleod paints for us seems derived directly from experience, from the politics and (counter-)culture of the late 1970s, the era of the end of the postwar British settlement and the arrival of Thatcher and monetarism: the era of punk.

Macleod’s punk sensibility is markedly different from a cyberpunk one, even though the narrative debt to a Gibsonian cyberpunk seems fairly clear. Rather than a romanticised hacker at the core of the narrative, with escape or transcendence of the system the aim (the Street a place to hide, to plan, but not to live), Macleod’s protagonist Moh Kohn is a communist, a mercenary, and the son of two Left activists murdered during the imposed restoration of the Hanoverian regime. The Star Fraction encodes the postwar history of the British Left and its several defeats, but is ultimately hopeful, if not strictly utopian.

I’ve become interested in the theory and politics of anarchy, partly as an attempt to fit my own views into the political spectrum more sensibly. (I’m probably of the libertarian Left, a socialist with anarchist tendencies.) Reading Macleod, therefore, hit a chord. Over Christmas I had raced through Orwell’s Homage to Catalonia, a counterpart to Nineteen Eighty-Four where, instead of that supremely dystopian figure of the future – imagine ‘a boot stamping upon a human face forever’ – there is the representation of fellowship, of community, of collectivity, apparent in the early days of the war in Barcelona, or the comradeship Orwell finds among the militiamen of the POUM. Orwell does not seem to believe in the possibility of a hopeful future – Homage, like Nineteen Eighty-Four and Animal Farm, is a text filled with the bitterness of the defeat of the hopes and aspirations of the Left – but in human feeling, in comradeship, there is something to counter the machinery of violence and oppression.

The Alan Moore/ David Lloyd comic/ graphic novel V for Vendetta is deeply indebted to Orwell’s imagined future Britain, a police state of grey austerity, but its dystopian protagonist is a ‘terrorist’, whose adherence to a politics of anarchy is also deeply implicated in the violence of the totalitarian state: V counters this by blowing up Parliament and the Old Bailey, assassinating (or murdering) scores of people, suborning the super-computer Fate, and eventually entering Valhalla as his funerary train explodes beneath Downing Street. (With too much blood on his/her hands, V cannot live on into the new political dispensation, whatever that may be.) His/her ‘precious anarchy’ forms the political backbone of the narrative. When Evey Hammond, a young girl rescued from rape and death by secret policemen by V, and then ‘trained’ (in a variety of ways) to be V’s successor, asks: ‘All this uproar and riot, V... is this anarchy?’ (Book 3, chapter 2: ‘Verwirrung’, p.195), V replies: ‘No, this is only the land of take-what-you-want. Anarchy means ‘without leaders’, not ‘without order’. With anarchy comes an age of ordnung, of true order, which is to say voluntary order. The age of ordnung will begin when the mad and incoherent cycle of verwirrung that these bulletins reveal has run its course. This is chaos.’

The same might be said of The Star Fraction: from an oppressive order to verwirrung, the narrative ends in suspension, before the creation of either ordnung or (as is suggested) the potential for a different kind of totalization under the socialist Republic. Anarchy seems a way, for dystopian texts, to square the circle between a politics of the Left and the dystopian form’s implicit valuation of the individual against the state.

In Grant Morrison’s comic book The Invisibles, the connection between the politics of counter-cultural resistance, in particular an ‘anarchic’ libertarianism, and science fiction becomes even more explicit. The Invisibles narrates the battle between the heroic group of the title (led by the self-declared anarchist ‘King Mob’, not only a slogan daubed on the walls during the Gordon Riots in 1780, but the name of a revolutionary group active in London in the 1970s) and the ‘Conspiracy’, whose activities and organisation reflect the kind of tentacular secret group from paranoid conspiracy texts of the 1970s, and in particular the tone of Robert Anton Wilson’s Illuminatus! Trilogy. The first collection of the book is called Say You Want a Revolution, a reference, of course, to The Beatles ‘Revolution’; the third is called Entropy in the UK. This title connects up the dominant trope of New Wave science fiction – entropy, a metaphor for social and cultural disintegration – with the title of the Sex Pistols’ first single. This connection between the 60s counter-culture and Punk is at the centre of Greil Marcus’s Lipstick Traces: A Secret History of the Twentieth Century, which takes the Sex Pistols as a late manifestation of a political and artistic revolt, which is traced back through the Situationists (an overt influence on Malcolm McLaren) to Dada.

Entropy in the UK begins with King Mob captured by his enemies and being tortured. To combat this, King Mob uses his cover as a writer to spin a psychic defence made up of SF narratives and psychedelia, which are materialised in the character of ‘Gideon Stargrave’. Stargrave is King Mob’s alter-ego, a 60s fashionista-cum-spy who, at times, looks like Noel Gallagher in a Sgt Pepper jacket. The real model for Stargrave, indicated by the references to an incestuous relationship with his sister and the arch dialogue, is Michael Moorcock’s Jerry Cornelius. (Although Stargrave is a playful homage, I don’t think Moorcock was very impressed.) Cornelius, the ‘rock and roll Messiah’, the ‘English Assassin’, was Moorcock’s own attempt to deal with key concerns in the post-war period: violence, post-colonial struggles, sex and rock music, fraying of the social fabric, the condition of London. Starting off as a kind of 60s super-spy variant, Cornelius became the vehicle for several New Worlds writers to play with the ‘nature of the catastrophe’, before Moorcock ‘took him back’ (in the words of John Clute) in the quartet of novels published between 1969 and 1977, where the fragmented, non-linear form was pushed in a much more melancholic direction.
In an interview published in Modem Times 2.0, Moorcock rationalises this by answering: ‘I modified the Cornelius books as I went along because too many you men were poncing about thinking it was cool to pose around being ‘amoral’. Like many writers attracted to SF, I’m intensely moralistic’ (p.111). In the same answer – to a question which asks why Moorcock describes himself as an anarchist rather than a Marxist – he states: ‘it’s a philosophical/ moral position from which I can easily make quick decisions of pretty much every kind. My anarchism informs my pro-feminism, for instance. I happen to believe as a writer that words are action and that we have to be able to stand by our actions and accept any consequences of our actions’ (p.111).

Moorcock’s anarchism is partly manifested in the ongoing flux between order and disorder in his novels, and in a sense, anarchism provides a kind of vital balance between the two: not the ‘order’ of tyranny, bureaucracy or even Utopia (nor even the order of the ‘heat death of the universe’), but the human order of collectivity, change, desire and everyday life. It’s clear that Moorcock locates this ‘anarchic’ order in the streets of Notting Hill/ Ladbroke Grove before London’s colonization by Capital and ‘the suburban’; in Modem Times 2.0 the narrative is bookended by two almost-sentimental sections located there in Christmas 1962. If there is nostalgia, though, it’s really for the period that follows and flows from this: Moorcock says, in ‘My Londons’, ‘through that era we called “the 60s” – which really ran from about 1963 with the Beatles first No.1 single to around 1978 with Stiff’s second tour – we continued to experiment in almost every field and genre’ (p.85). In Mother London (1988), Moorcock locates this in the chapter called ‘Variable Currents’ in 1970, and in particular at a fair (or appropriately, carnival) in which the characters ‘would all gladly live this instant forever’ (p.371). This chapter is the high tide of the 1960s, a happy whirl (embodied in the merry-go-round) which has yet to fling itself to pieces. The anarchic centre still holds.

Moorcock, Moore, Morrison, Macleod: all of these writers construct fictions with more-or-less explicit negotiation with the theory and practice of Anarchy, and also with the cultural politics of the period between 1963/4 and the end of the 1970s, the end of the post-war British settlement, the beginning of the neo-liberal project. What I haven’t stressed enough is the playfulness with which each deals with this history; although absolutely serious, none of these texts is solemn. I find the Cornelius books in particular very funny. It is in that spirit, of hope and of laughter, that these books illuminate their representations of anarchy.