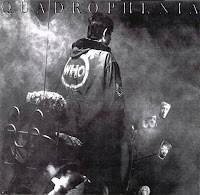 Driving up to the Placing Morecambe symposium held at Lancaster University a few weeks ago, I listened to The Who’s Quadrophenia album. This was a happy accident. A few days before, trawling through the hard-drive on our Freeview receiver, I noticed that the excellent BBC4 documentary on the making of Quadrophenia was still there, and sat down to watch. Later, the psyche gave me a nudge and I put my Who box-set and Quadrophenia in the car. Only half-way up the motorway did I realise the appropriateness: in the story told by the concept album, Jimmy, the young Mod, suffering from a personality disorder that Townshend dubs ‘quadrophenia’ (Pete wanted to make the album in quadraphonic sound, but it turned out strictly stereo, four faces condensed to two) has a kind of breakdown, and travels from his South London home to Brighton, where he has an epiphany at the sea-side. The album ends ambiguously: the listener doesn’t know whether Jimmy ends his life in the sea (one of the songs is called ‘Drowned’) or whether he simply throws off the burdens of being a Mod: 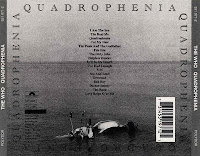 I’ve always understood this ending hopefully: the drowned scooter on the lp’s back cover (a Vespa GS150) signifies to me a rites of passage: that he turns back from the terminal beach and returns to London a different person.
That it is Brighton beach upon which Jimmy has his epiphany – with its stony strand on which the opening track, ‘I Am The Sea’, falls with a roar and billowing hiss – is of course a historical nudge to the listener who understands or recognises the place of the Mod in post-war British popular culture. Brighton’s is the symbolic beach upon which Mods engaged in a series of semi-theatrical fights with Rockers, defining a schism between two opposing 60s youth subcultures. Rockers, who rode motorcycles (mainly British BSA and Triumph bikes) and wore leathers, were identified with 50s rock’n’roll; Mods, who rode Vespa or Lambretta scooters and wore suits, sharp styles and American army parkas, were oriented towards Italian fashions and listened to soul, Motown, bluebeat, and r’n’b. Dick Hebdige, well-known author of Subculture: the Meaning of Style, in his essay ‘The Meaning of Mod’ argues that Mod subculture was localised – mainly in London and the South-East of England – and represented a kind of resistance as consumption. Where the Rocker, Hebdige argues, inhabited a ‘traditional’ and working-class subjectivity, the Mod (who he associates with office work rather than manual labour) is aspirational, potentially socially mobile, and oriented towards a new, Modern future: hence the name, Modernist.
Since the Mod revival of the early 1980s (when I myself was a teenage Mod: definitely a ‘Ticket’ in the hierarchy of the group, where the ‘Faces’ at the top ‘led’ the ‘Numbers’, ‘Tickets’ and ‘7 and 6ers’ (named after the price of the roundel-printed t-shirt they bought from Woolworths)), Mod has been less oriented towards the future, and more towards the past. It has also been oriented away from the South-East, where the battles between Mods and Rockers began in Clacton (up the coast from where I grew up in Essex) on the Easter Bank Holiday in 1964, then flared up in Brighton and along the South Coast on the following Whitsun weekend. The continuity of Mod revivalism with the remains of the Northern Soul circuit (centred on the North-West of England), and the importance of the phenomenon of ‘scooterist’ rallies to the contemporary Mod scene has lent it a more nostalgic structure of feeling, somewhat at odds with the emphases and aspirations of the original Mods. (And also different in age: my 40-something brother-in-law is now a scooterist, having been a ‘casual’ in the 1980s.)The 60s Modernists have their antecedents in the hip, consumption- and display-oriented young metropolitans documented in Colin MacInnes’s novels, most notably Absolute Beginners, the geographical epicentre of which was Soho, a part of London with a distinct and Italian-influenced everyday/night life (in delicatessens, restaurants, coffee bars). This youth culture, and its extension into the Mods, pointed away from the Britain of austerity, rationing and work, towards hedonism, consumption and leisure. The Mods were oriented towards a future Britain of spectacle, the ‘white heat’ of technology, and one of productivity and full employment, of the road out of the metropolis towards the periphery. Except in the case of the post-war British condition of London’s centrifugal energies (dispersal of working-class populations in new towns and LCC estates) and centripetal dynamics (post-consensus acceleration of London’s economic predominance), that future did not come to pass.
‘The beach is the place where a man can feel/ It’s the only place in the world that’s real’ (‘Bell Boy’)
In Quadrophenia,  Jimmy meets the ‘Ace Face’ (‘I don’t suppose you would remember me/ but I used to follow you back in ‘63’), who works as a Bell Boy in a Brighton hotel. 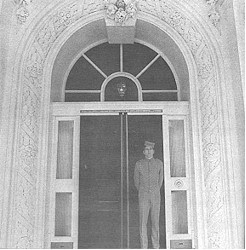 ‘I got a new job
And I’m newly born
You should see me
Dressed up in my uniform [...]

‘Bell Boy’ emphasises the deadening work , the alienating and humiliating work that lies behind (and provides for) the Mod image of leisure, display and autonomy. As Hebdige notes, Mod’s orientation towards consumption as a form of resistance makes it all-too-easy to recuperate as a ‘lifestyle’, to fold the Mod back into sanctioned cultures of productivity and sanctioned leisure time. The beach, however, is different, a liminal space (as discussed at the symposium) where Jimmy’s own implication in the world of work (notably, on the lp photographs, he is shown carrying bins: he is a dustman, not an aspirational clerk or executive-to-be) is dissolved, transcended. Not only is this form of Modernism a suit of clothes, but so is the subjectivity of post-war British masculinity that he finds difficult to negotiate. While the Ace Face accepts his humiliation as part of the economy of Mod-ism, Jimmy rejects it.

For a reading of Modernist Morecambe (itself the recent site of scooterist rallies, although the 2013 one was apparently cancelled), that Ace Face is a ‘bell boy’, that he works in a hotel is crucial (the hotel as locus of other people’s leisure time, whereupon the circuits of labour and service that structures this ‘holiday’ time become apparent). The Midland Hotel, the Art Deco landmark that adorns the Morecambe seafront (and which has been a crucial touchstone for the Placing Morecambe discussions), is an emblem of the spectacular (and aspirational) representation of the British seaside masking the labour that enables it to function. The Midland, now the centre-piece of the Urban Splash-conducted restoration which is a clear pump-primer for ‘regeneration’, is at once separate from the vernacular architectures of the Morecambe front and is echoed by other Art Deco buildings in the town, as was noted in the symposium. Art Deco housing, with its maritime emphases on white surfaces, glass, porthole windows, polished metals, is found in towns next the sea – in Essex, notably at Frinton-on-Sea, just 7 miles north of Clacton – co-exists with the ‘seaside’ but is notably different from it. The Modernism of the Midland Hotel, its geometrical regularity standing out against the wash of the sea on the beach, dissolving horizon, blue or grey-brown of the Bay, is at once a spectacular resistance to the peculiarities of location (see Bexhill’s De La Warr pavilion, or Margate’s Turner Contemporary) and an organisation of point-of view: of the rail passengers whose first view of Morecame when disembarking from the train would be the hotel, and the perspectives across the bay (away from the town) offered by the hotel’s tearoom and accommodation. 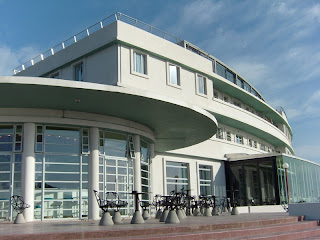 Suggesting that the Midland Hotel is like ‘a beached liner’ is not so far of the mark. The Midland is Art Deco, but in particular it is ‘Streamline Moderne’, part of the vogue for the aerodynamic that characterises a particular moment in 20th-century design, one embodied in the work of Norman Bel Geddes. The ‘Streamline Moderne’ is at the centre of William Gibson’s well known short story, ‘The Gernsback Continuum’, in which the narrator meets a British enthusiast for American ‘raygun Gothic’, the streamlined architecture and objects that go unnoticed in American everyday life, from gas stations to pencil sharpeners. Having immersed himself in this future-that-never-was, the narrator drives through the Arizona desert and experiences a kind of hallucination:

I looked behind me and saw the city. The books on Thirties design were in the trunk; one of them contained sketches of an idealized city that drew on Metropolis and  Things to Come, but squared everything, soaring  up through an architect's perfect clouds to zeppelin docks and mad neon spires.

That city was a scale model of the one that rose behind me. Spire stood on spire in gleaming ziggurat steps that climbed to a central golden temple tower ringed with the crazy radiator flanges of the Mongo gas stations. You could hide the Empire State Building in the smallest of those towers. Roads of crystal soared between the spires, crossed and recrossed by smooth silver shapes like beads of running mercury. The air was thick with ships:  giant wing-liners, little darting silver things (sometimes one of the quicksilver shapes from the sky bridges rose gracefully into the air and flew up to join the dance), mile-long blimps, hovering dragonfly things that were gyrocopters...

I turned the headlights on. [...] And saw them. They were blond. They were standing beside their car, an aluminum avocado with a central shark-fin rudder jutting up from its spine and smooth  black tires like a child's toy. He had his arm around her waist and was gesturing toward the city. They were both in white: loose clothing, bare legs, spotless white sun shoes. Neither of them seemed aware of the beams of my headlights. He was saying something wise and strong, and she was nodding, and suddenly I was frightened, frightened in an entirely different way. Sanity had ceased to be an issue; I knew, somehow, that the city behind me was Tucson, a dream Tucson thrown up out of the collective yearning of an era. [...]

It had all the sinister fruitiness of Hitler Youth propaganda.

The Midland Hotel, a hallucination on the Morecambe seafront, real and not-real, a remnant of the ‘collective yearning of an era’, need not be folded back into a critique of architectural utopianism-as-totalitarianism as suggested by Gibson (and also, it should be noted, by Jonathan Meades in his recent documentary on Essex, whose invective against much of the county’s planned architecture was explicitly anti-utopian, and had a vernacular or even volkische architecture as its preferred counterpart). That ‘collective yearning’ can also be found in the streamlined aesthetic of the Vespa scooter that Jimmy crashes into the sea,

another beached craft, listing on the tide. The lines of the scooter promise speed, mobility, Modernity, the future: a future that Jimmy can only embrace, ironically enough, by sloughing off Mod costume, by abandoning the past/future (a future-past) and embracing the ‘human near-dystopia we live in’ (Gibson, p.11).

The Midland Hotel, ultimately, is that most Modern of things,  a time machine, propelling its users into the leisure-time of the past, the comforts of Art Deco luxury and style as a tempo-rary abandonment of present-day Morecambe itself, turning one’s back on the town, looking out to sea, like Jimmy, while sipping a nice cup of tea.
at July 03, 2013 1 comment: