To be honest, I was never much of a fan of Kubrick’s film of The Shining. But then, I was a fan of the book. I’d scared the pants off myself reading it at night when I was 13 or 14, and had become a big King fan, getting all of his books from the local branch library (the ones my Mum hadn’t dropped in the bath, blowing them up from hamburger to quarterpounder size). I was a teenage fan of horror films, like many, and my folks kindly let me see mainstream horror films from the video store (pre-Blockbusters). This was the era of the video nasty, but with no elder brothers, and little real inclination, I didn’t see the mother-lode of banned horror until much later. A taste for a certain kind of horror fiction ran in the family: my Mum, as I’ve said, was also a reader of King, and my Nan, usually a reader of Catherine Cookson sagas, extolled the virtues of Carpenter’s Halloween to me after she’d watched it on late-night tv. My Dad was no fan of the genre, preferring Westerns (which I also love), but tolerated me watching them.

I remember being thoroughly disappointed by Kubrick’s film when I saw it, also on video. (The white box  of the Warners’ video packaging, with Nicholson’s face grinning out of it, was iconic.) I thought Nicholson was hammy, the scare-effects crude, the death of Hallorrann ludicrous, and the whole thing a misunderstanding of the genre by a director who had no feel for it. I kept this opinion for years, and while I love Dr Strangelove and 2001 (and admire The Killing and Lolita), The Shining went on to the pile of Kubrick films that I dismissed: A Clockwork Orange (also found wanting compared to the novel), Full Metal Jacket (its Beckton gas works petticoats showing all too clearly for me), and latterly Barry Lyndon (which I found a static bore) and Eyes Wide Shut (which seemed to me like bad Dennis Wheatley. And that’s pretty bad).

What’s changed? Well, the first thing was, I decided to put the book and film on a course I was teaching on literature and film. And returning to the film, I saw there was a subtlety I’d missed, particularly in Nicholson’s performance; and that the adaptation was designed with a purpose in some ways antithetical to King’s book and its emphases, but was coherent in itself. 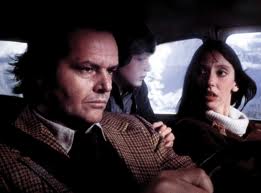 I recall watching the dvd extras to the standard recent release of The Shining, which showed an interview with Nicholson saying ‘They want to see real? They haven’t seen real. I’ll show them real’: and I thought, with Nicholson so over the top, it seemed, how can he have thought this ‘real’? His performance in The Shining seemed to me to anticipate his later scenery-chewing turn in Batman, cartoonish and overblown. But I watched the scene where he drives Wendy and Danny to the Overlook more closely, and just as the back-projection is dislocating (an old Hitch trick), so is Nicholson’s performance. It’s off. There seems to be a delay between the other actors and his response; the timing is all wrong. And in the scene where he is interviewed for the caretaker’s job, there’s the same dislocation, the same absence of timing, what seems to be woodenness: plain bad acting. Then it clicked. It’s not Nicholson doing the bad acting in these scenes: it’s Torrance. Torrance is performing a role, badly, trotting out set responses, learned reactions, just a fraction too late. The Overlook’s manager buys it: but I didn’t, and I saw why. This wasn’t a failure of acting technique, but acting technique itself.

The problem is, I think, that having these scenes so early in the film means that, unlike in King’s novel, there is little real development in Jack Torrance’s state of mind: he’s sociopathic to begin with, and the Overlook just develops this into flat-out psychosis. But King’s Jack Torrance is, at heart, a good man, beset by inner demons: his troubled relationship with his Father, his failure as a writer, his alcoholic dependency (and, I think, suggestions that he has repressed his own ‘shine’). The Overlook preys on his weaknesses, in the book, eroding his sense of himself and replacing it with a brutalised version of his own Father, a violent patriarch, tempting him with the possibility of a writerly scoop, the Overlook’s own history. This material is found in the basement, where the boiler is; and the absence of the boiler from the film is a crucial development which completely alters how the text works. 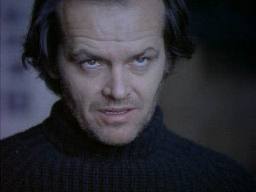 In King’s novel, the boiler – the thing which should not be forgotten, but is, ultimately, by the degenerated and monstrous Torrance – is a symbol of depth psychology, the damage inflicted upon the son by the Father, wounds which have never healed. Jack succumbs to the Overlook because of repression, the hidden desires and needs brought into being by his childhood traumas; Danny, in a testament to how Jack has battled his demons and not passed on trauma to his own son, has the strength and confidence to face the Overlook and deny its power. In the film, there is no boiler. Instead, there is the maze or labyrinth: actually, in the hedge-maze that Danny flees into at the end of the film (and of which we see Torrance looming over a scale model and his wife and son stroll around the real thing before the snows), and symbolically, the space of the Overlook and in the spaces of Jack’s own psychosis. The maze is flat, one-dimensional, where the boiler relies on three dimensions for its effect, and this very flatness corresponds to Kubrick’s hostility to psychological depth-models (to Freud) in this film and throughout his works. (I like Dr Strangelove and 2001 particularly because their lack of psychological ‘depth’ and human ‘characters’ fits perfectly with the worlds shown in them, the caricature Cold War apocalypse of the former and the mystical science fiction of the latter.)

The lack of the boiler also indicates the extent to which Kubrick brackets off history in the film; where the Overlook, with its Mob past and parties taking place on dates of particular 20th-century resonance, is a symbolic American stage in King’s novel, its violence and pathology reflecting that of the United States itself, Kubrick internalises the drama, the Overlook becoming an extension of Torrance’s (and previously, Grady’s) psychopathology. But in Kubrick’s The Shining there is nothing below the pathology: no past, no trauma, no Father-figure, no wounds. Nicholson’s Jack therefore is more monstrous because less humanised, more Michael Myers than conflicted and struggling Father to Danny. In a scene very late in the book, entirely absent in the film, Jack traps Danny in an upstairs corridor, and under the influence of the hotel, aims to kill his son with a roque mallet. Danny refuses this ‘mask’, this ‘false face’, and attempts to contact the ruin of his daddy who still exists somewhere within. It’s an affecting scene, as when Jack really does re-surface and tells his son ‘Run away. Quick. And remember how much I love you’, Danny stays, takes his daddy’s hand, and kisses it: ‘It’s almost over’, he says, meaning Jack’s pain, as well as the narrative itself. (Danny has not forgotten the boiler.)

In Kubrick’s film, there is no ‘Daddy’ Jack, no normal man within, overtaken by the Overlook. King’s story is of a haunted house, but also a haunted man. Kubrick’s entire narrative takes place on the stage of Jack’s deranged mind, the Overlook a kind of projection of what was always there. In a sense, then, Kubrick’s film doesn’t let Jack off the hook the way the novel does: King implies that it wasn’t really Jack doing those things after all, it was the hotel. Kubrick does not spare his protagonist, but he also does not humanise him, or show us his struggles either as a writer or as a father. All work and no play might make Jack a dull boy, but all flatness and no depth takes away the human element of the drama. 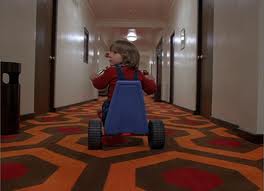 Space, not psychology, is then the key to Kubrick’s The Shining, the space of the vast set that he had constructed to be the Overlook, the rooms and corridors that Danny pedals down on his go-kart followed by the Steadicam (a gyroscopically-mounted camera popularised by the film), an eerie or ghostly presence that haunts the boy and the film. It is this space, a space that Nicholson’s Jack is ultimately lost in (the final shot of the photograph of a party from 1921 with Nicholson centre frame, emphasising that Torrance has ‘always been the caretaker’, is chillingly effective as a visual coda) that is central to the film: the labyrinth of Jack Torrance’s madness. The reduction of the narrative to this stage has other effects, too: poor traumatised Shelley Duvall essays a Wendy that is nowhere near as resourceful or strong as the character in the novel; Scatman Crothers’ Hallorann comes all the way back from Florida to no purpose whatsoever; and even Danny, seemingly younger than the boy in the novel who can intuit things because of the shining itself, is not afforded the kind of scene that reveals the strength of his love for his father.

The Shining is a film which has become much more highly regarded as time has gone on, and the much longer US cut now in circulation will again allow the opportunity to see it afresh. I now like the film, though not as much as Dr Strangelove or 2001; and certainly not as much as I like King’s novel, still one of his very best.
at October 28, 2012 1 comment: